Deceit is a game developed by Automaton Studios and released on PC in March 2017. It mixes the FPS (first-person shooter) style... and horror.

When you start a game, you will wake up on the floor of one of the four randomly chosen maps: an asylum, a forest, an arctic base or a manor. The role you will play during this part is then assigned to you: you will be either innocent... or infected. Indeed, each game includes six players, among which are two infected players. The goal of the innocent players is to unmask the infected players (and escape, by the way), whose own role is of course to kill the innocent! I think that you already understood, that this game is a kind of mix between the famous game The Werewolves of Miller's Hollow and Murder's game mode from Garry's Mod.


Game mechanics and way of playing


Each map has three "levels", in which you will evolve according to two different periods: the day, and the night, materialized here by power cuts. During the day period, players will have to equip themselves with different items to protect themselves during the night - we'll talk about it later. The infected, on their side, have to discreetly drink blood bags scattered on the map in order to fill their gauge...

Once this blood gauge filled, it will allow them, during the night, to transform into their Terror form, a kind of very fast and noisy zombie, having the ability to see perfectly in the dark. During their transformation, they will have to catch the innocent... and eliminate them.

And it is during this phase that most of the objects that the players will have obtained during the day will intervene. First of all, let's specify that players will have to draw levers that will activate objectives. For some goals, you will simply need to stay in one area, while for others you will need to shoot at three targets in order to get your reward. Finally, some goals can only be achieved by cooperating, one player walking on a plate that lifts a box and the other retrieving its contents. This type of goal is intended for the most important objects, for which you will very often need the agreement of the rest of the group regarding the person to whom the object should be given.

But let's talk more in detail about these goals: there are…


- Cameras and flashlights that allow to blind and slow down Terrors, preventing them to eliminate the innocents


- Antidotes, extremely rare objects that allow to bring back to life an innocent who has been eliminated by a Terror (or someone having received a lethal injection, we'll talk about it right after that). So this item must not fall into the hands of an infected player!


- Trackers that, once applied on a player, will allow others to see him through the walls ; it is useful to make sure that he doesn't turn into a Terror or gets a bit too close to blood bags...


- The shotgun can only be obtained on "duo goals" (with the pressure plate and the box), and, on rare occasions, in a "zone goal" from the last level of a map. It allows to easily down Terrors as well as players so it's a very good asset, whether it is for innocent or infected players... but still, you must be good at aiming!


- The scanner is obtained from the second "level", under the same conditions as the shotgun and is an object just as important as the antidote since it allows to determine if a player is whether innocent or infected, thanks to a single mouse click! Again, if this object falls into the wrong hands, it can totally return the situation...


- The lethal injection is an object which is exclusively obtainable on a "duo goal" at the third and last "level" and allows to instantlyeliminate a player. Once the injection is done, the only way to bring the player back into the game is to apply an antidote. Another object that should not be recovered by an infected person...

When the night comes, the innocents will not only have to defend themselves; they will also need to find fuses and place them in circuit breakers to restore power and move to the next "level". This forces a majority of players to cross the map, and therefore to take risks... Indeed, if no one places fuses, the infected will then be in rage, that is to say that they can turn into will in their Terror form, and eliminate as many innocents as they want, unlike their normal transformation where they can only eliminate one at a time. The game ends when all the innocent have been eliminated or the remaining players have escaped.

One of the most important mechanics of this game is the vote. When a player is downed, other players can shoot him to vote and eliminate him. The number of votes needed for an elimination decreases as the "levels" of the map are passed. This mechanism acts as a votekick that will not only eliminate the infected (this is his main function!), but also to get rid of players who are a bit too annoying...

Finally, be aware that the game has an integrated voice chat in which it is necessary to speak if you want to defend yourself, blame other players, or develop a strategy with your infected teammate! This is where the whole principle of the game lies, lying and treason, giving arguments to make you look innocent while blaming the other players. If you do not use it, your games will unfortunately not have great logic or interest... How could you communicate the information that a player is infected, otherwise? Firing at sight? You would be the first to be accused...

You can customize your character's abilities through the skill tree. Reinitialized regularly, it allows you to grant new skills, whether you are innocent or infected during a game (walk faster at night, see the blood bags through the walls after drinking one, put on traps quicker, drink blood bags quieter, etc.). 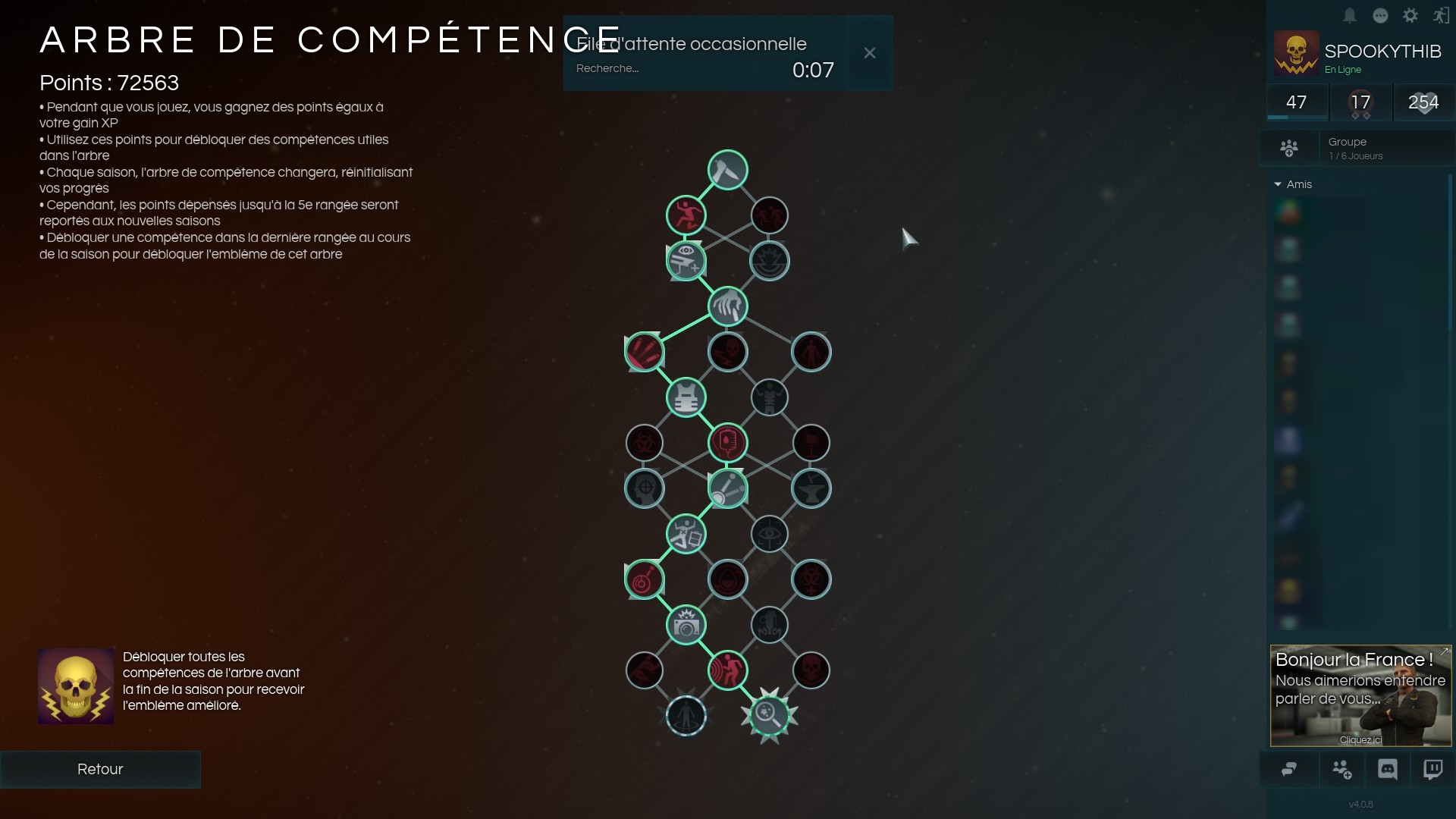 
The game is available for free on Steam and offers additional purchases to gain more experience points (XP), personalization items (skins) as well as “Werewolf” and “Vampire” packs which unlock new types of Terrors and elements of personalization. Apart from these Werewolf-Vampire-Terrors, the items you can buy with real money in no way affect the gameplay and are purely cosmetic. Concretely, even Terror does not give an advantage over other players, it just brings... a bit of change... and style. Another great point for this game! 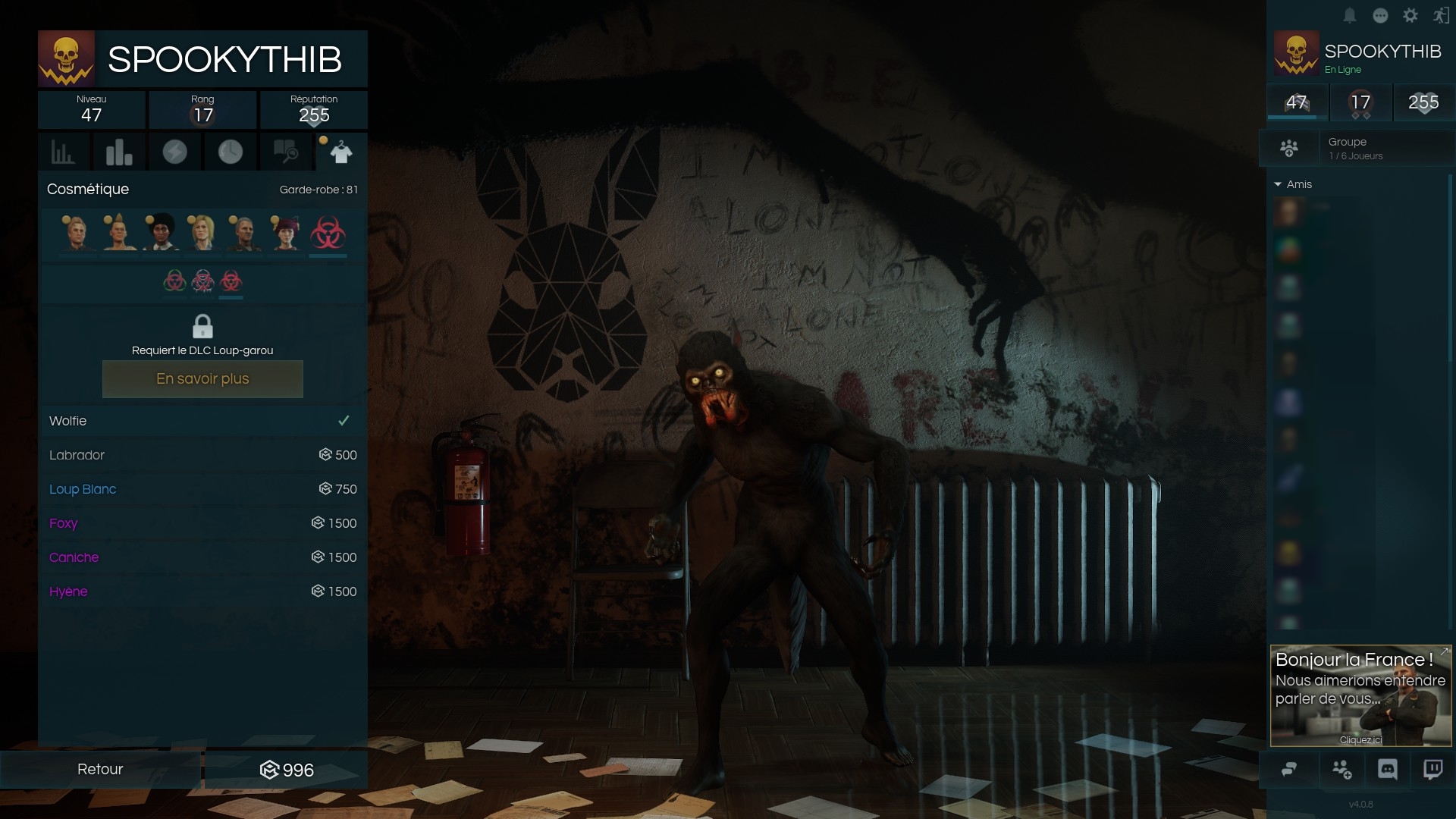 
The game is difficult to learn when you start playing it without knowing its mechanics. You have to play a few games before you understand the different elements. But with the presentation I gave you, you should be ready! That’s the only con I can think of, with the fact that some people sometimes tend to... get upset a bit too quickly. But it's a multiplayer game, after all! It’s the same everywhere. The vast majority of players here is still very friendly.